This email address is being protected from spambots. You need JavaScript enabled to view it.

What is Water Softening?

Water softening is a procedure aimed at freeing water from lime, magnesium, calcium, manganese, iron, and other impurities from water. It is applied to so-called ‘hard water’, which has an increased concentration of these elements, as well as multivalent metal cations.

What is hard water?

The water in old Milton and much of the Halton Region comes from ground waters. As the water moves through soil and rock strata, it dissolves the described minerals and grows hard. The degree of hardness varies from region to region depending on the type of soil and occurring rock.  *Note: newer homes in Halton utilize water from Lake Ontario which also has a level of hardness.

Although hard water does not cause any serious health issues, it poses serious problems in household. The minerals dissolved in it deposit on pipe walls and gradually form a thick lime buildup. It also appears around drain holes and on faucet nozzles. The buildup impedes water flow and often requires replacement of an entire plumbing system. Lime also appears in pots, kettles, glassware and coffee machines.

Also, it affects the look of clothes and linen washed in it, and hair. Fabric feels hard and may turn dull. Hair feels rough and sticky.  If your house is connected to a municipal water supply network, you can request a report on the hardness of water in your area.

What can I do about it?
In order to maintain desired level of hardness, it is advisable to incorporate a water softening unit in your plumbing system.

Ion Exchange Water Softeners
Water softening is a process based on ion exchange. Water softeners have so-called media beds – areas filled with sulfonated polystyrene beads saturated with sodium. The ions of calcium, magnesium, manganese, iron, etc., attach to the beads, and the sodium is washed out of them and into the passing water. In other words, the hardness minerals are replaced with sodium. Eventually, the beads become laden with these minerals and need to be recharged by way of exposure to a brine solution.

Because softened water contains sodium, physicians recommend to use it with caution and not to use it for cooking purposes. Mechanical water softeners are very easy to install and use. Semi-automatic and automatic water softeners can be controlled electrically and electronically.

Feel free to give us a call today at 905-699-8898 and we'll provide you with the best information for fixing or installing a new water softener.  We provide services to resident of Milton, Oakville, Burlington, Acton, Georgetown, and Campbellville.

Customer Service That
You Can Trust

With Milton Plumbing and Heating's Straight Forward Pricing you only pay for the work completed.  Owner Alex Schrempf prides himself on honesty, hard work and integrity and ensures all jobs are completed on time and on budget.  Customer service is key to running a local business and Alex knows what it means to provide friendly, knowledgeable service.  All employees are held to the highest of standards to ensure you receive only the best possible work! 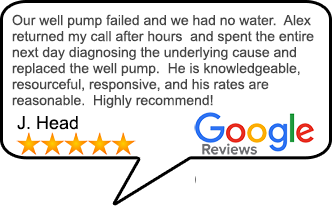 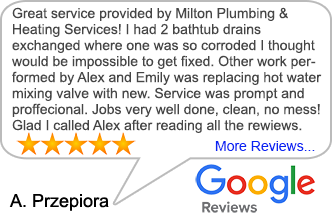 If you have a plumbing emergency, need a leaky faucet fixed or any other plumbing service give us a call